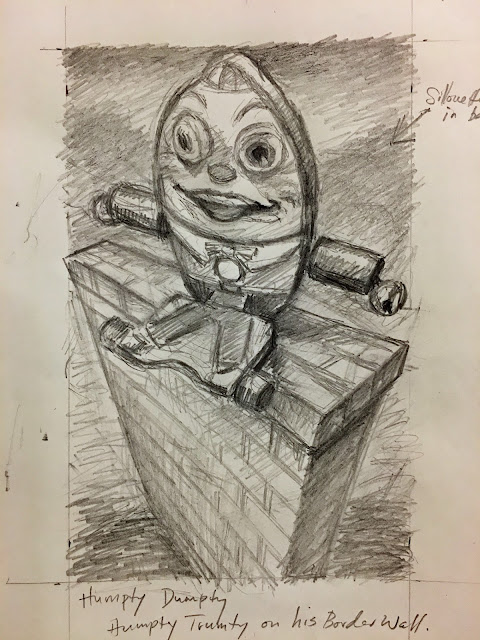 MY CURRENT PROCESS My creative process has changed a lot over the course of my career and I'm sure it will continue to change in the future.  Lately it's been "involved" to say the least.  I've been beginning my process by sketching in 2-dimensions very rough image ideas based on selected characters that I find fun to look at such as "Humpty Dumpty".  ( *Refer to above sketch) Next, I translate the rough idea from 2-dimensions to 3-dimensions, where it really gets interesting and more visually complex. I do this at a very small scale (3-5 inches generally). It also helps me work out ideas for the story I want to tell and incorporates the sgraffito surface technique that I enjoy so much. (*refer to clay maquettes above) And then I jump back to the two dimensional world and create a charcoal drawing.  This is a jump in scale, being that the drawings are usually in the 18 x 24 inch range.  This allows me to see the idea bigger as well as refine my approac
Post a Comment
Read more 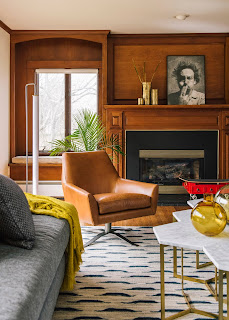 West Elm RISD Cottage Tour Although I've never had a chance to visit the new RISD Cottage, I feel like I have a bit of a connection to it.  Approximately 1 year ago I received amazing news that the art and design school in Providence, RI, where my parents attended and where they met each other for the first time acquired one of my artworks. My mother would use the RISD Museum as a form of child care, when she went back to finish up her degree in Textile Design.  My sister and I had the extraordinary privilege to be able to attend t he museum's after-school art classes  drawing from the many master works that hung on the walls.    Years later, I was able to attend RISD myself as a student where I thrived artistically and developed so many deep and long lasting personal relationships.  Directly after graduate school, my first professional teaching job was visiting professor in  the RISD ceramic program.  It was truly my dream job.  When I found out that W
1 comment
Read more 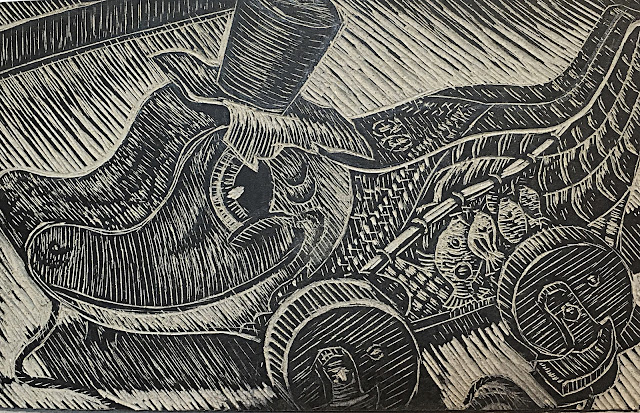 It's always fun and exciting to do something for the first time, but I seriously wonder why I hadn't printed using linoleum before.  I loved it.  Carving the block seemed to be a very familiar process mimicking the sgraffito technique I've used in ceramics for years.  The biggest challenge for me is pulling a really sharp and even print.  I'm a bit of a perfectionist when it comes to "human made" works.  There are more prints in the studio trash can than on the drying rack.  I'll post some finished prints when I feel they're good enough, but for now here are a couple of the original carved linoleum blocks.   "Allie Gator",  Lino-Block "Unstable Genius",  Lino-Block
Post a Comment
Read more 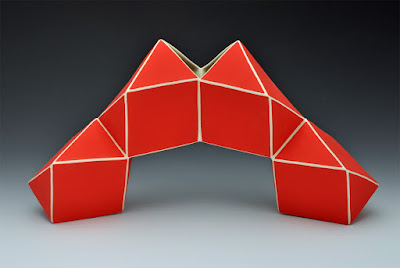 MOD ULAR ceramics Quattro,  cast porcelain, sgraffito I've been casting geocentric vessels in porcelain for a few years and frankly was getting bored by the monotonous process of removing the same form from a mold day after day.  I found that I was taking the cast forms and flipping them upside down, turning them on their sides, stacking them in various ways, trying to exercise my creativity.  This was an act of creative play that I thought could add variety and challenge to the casting process of making multiples.  The problem was the forms that I was casting couldn't connect in exacting ways.  So I thought if I made a form that had uniform and consistent shapes that would connect to themselves, I could combine multiples to make larger and more complex forms.  It worked!  I'm simply titling them by the quantity of modules that it took to make them.   Uno,  cast porcelain, sgraffito Dos,  cast porcelain, sgraffito Dos,  cast porcelain, sgraf
1 comment
Read more 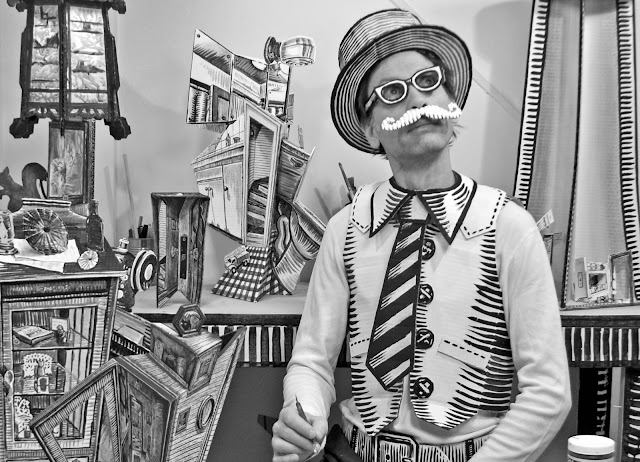 ~ Mister Sgraffito ~ *Originally Posted November 30, 2011. I  have to say that I've had an idea for an image of myself in my studio.  I've been devoted to ceramics for the last 23 years but ever since I cheated on clay with cardboard I've had thoughts of working large once again.  When I say large I'm talking 4 ft. to 8 ft.   Not impossible to achieve in clay but the reality of firing any clay object of that size has many technical,  practical and philosophical concerns surrounding it.   C eramics is not a medium that I have any intention of putting on a shelf, but working in both the clay and the paper medium seems to be where my head is at these days.  I think I will work on smaller clay objects while getting crazy big with the paper works. S graffito is a ceramic technique that involves scratching through an applied contrasting slip clay into the clay body beneath creating marks, designs or imagery.  I LOVE IT!  It's something I can&#
Post a Comment
Read more